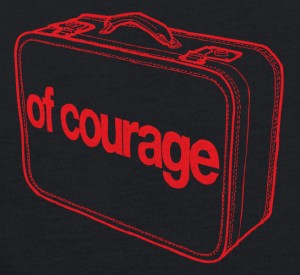 I am just driving home from work, like 100 other times. I have the green light at the intersection ahead. Just as I enter the intersection, I catch a flash from the corner of my eye. A van is crossing from left to right in front of me. I remember shouting in my head at the other driver. “You are running a red light.” Now the side of the van is in front of me. The driver’s profile tells me she doesn’t see me. I scream.

Later, I remember a mountain stage of the Tour de France. It’s in the Haute Pyrenees, the range separating Spain and France. It’s near the top of Col de Tourmalet or maybe the Col d’Aubisque, or another mountain top with a musical name. Two riders are making their way up the incline with the others in the race trailing behind them. I hear the announcer describe their battle and the pain in their legs. He says, “They are in the red zone now. They will have to dig deep into their suitcase of courage.”

That van is in front of me and I know the inevitable is about to happen. For some instinctive reason, I swerve right. I did it before I could think about it. That move alone kept me from colliding head on into the person who ran the light.

And now, two weeks later, I am wondering how I can deal with the fallout. No witnesses. The police refused to write a report at the scene. The other driver lied and said I ran the red light. My car is totalled. In an instant, through no fault of my own, I lost my car. Her insurance won’t replace it. That seems important and frustrating until I remember that I almost lost my life. Somehow the car becomes insignificant.

I’m wondering if I packed my suitcase of courage. Far away, I hear the song that says, “Have a Little Faith in Me” as only Joe Cocker can sing it. And I hear my mother’s voice, speaking with the surety only a mother can have. “It will come back to haunt her. You don’t get away with that kind of stuff.” Then, somehow, I know I am going to make it through. I am going to be alright.