Life made sense when Tony was alone in the cockpit. He slowed the plane on approach. His gloved hand nudged the stick, he pressed the rudder pedal with his boot, and the plane banked. He cocked his head to follow the horizon. The plane leveled out, and he straightened his neck. The narrow airstrip centered in his windscreen had a single hangar at the far end.

The shadow of the plane passed over the boss’s pickup. It was racing up the dirt road that connected the airstrip to a singlewide mobile home. Seeing the pickup surprised Tony. Velma Lee had told him that R.J. wasn’t supposed to be back from Dallas until tonight. Tony tapped his shirt pocket, then remembered his pack of Kools on R.J.’s nightstand.

“Shit,” he muttered. He hoped Velma Lee had thrown them out with the vodka bottles and the Polaroids. He pushed those thoughts aside. He knew distractions and landings didn’t mix.

Tony picked out his touchdown spot. It was halfway down the airstrip, near the company sign that boasted: “R.J.’s Cropdusters, Beaumont, TX — Two planes to serve you better.” Only 10:00 a.m. and he had polished off the last load on a 600-acre rice job. That was almost $250. In 1972, at 28, that felt like getting rich. Should he get a new car? A round waterbed? At least some expensive booze. He brought the Weatherly in for a picture-perfect landing.

The wheels of the low-winged monoplane kissed the ground. Landing was bittersweet. He liked doing it well. He hated returning to earth. The tailwheel touched down, the horizon disappeared behind the engine, and he began the familiar bumpy roll down the runway.

The right rudder pedal wilted beneath his foot. No brake.

Tony steered using the tailwheel while he had speed. The aircraft slowed and he jabbed at the dead brake pedal over and over. The end of the runway was approaching in slow motion.

“Not the fucking hangar,” Tony groaned. The tin structure and the plane parked beside it grew larger.

Tony sucked on his dark, thick mustache with his lower lip and rolled on helplessly at five miles per hour. The plane was a breath away from the building and he was just along for the ride. The landing gear hit a small rut. The craft veered left. The wingtip snagged the corner of the hangar and turned the plane.

R.J.’s other plane was now dead ahead. Tony’s spinning prop chewed into the wing of the other plane with the noise and fury of a giant can opener. Tony listened and winced. Seconds later, finally at a standstill, he scowled at the pool of brake fluid on the cockpit floor. He unlatched his seat belt, and the clicking sound broke the menacing silence.

Tony popped open the canopy, pulled his long body out of the plane, and climbed out to stand on the wing. The pungent smell of gas hit his nose and crawled down his spine like electricity. Was there fire? It was always his first thought after a sudden stop. But there was no smoke, no open flame. The fumes rose from the severed gas tank in the shredded wing of the other plane.

He exhaled, snagged the helmet from his mop of black curls, and shielded his blue eyes from the sun. R.J. wouldn’t be happy. The curled propeller blades were tangled in the half-eaten wing of the other plane.

“These two are history,” he said. He wanted to brush it off or fix it. He couldn’t stand the sight of a plane that couldn’t fly.

Trembling spread through his body to his fingertips and toes. He threw his scuffed white helmet halfway to his ragtop ’68 Mercury Monterrey. Twenty minutes ago, sulfur dust had swirled behind the single-seat Weatherly. The landing gear had skimmed over shuddering blades of rice. Tony had felt safe in the yellow plane, even flying fence high at 100 mph.

R.J. always assigned the worst fields to Tony. The one he just finished had been a damn obstacle course. Trees, stand pipes, a shed, barbed wire fence, power lines. For Tony’s first day on the job, R. J. had made him fly that field. Later, R.J. had slapped him on the back and called him “a pilot’s pilot.” R.J. had even admitted he couldn’t put the plane under the low wire on the south end. R.J. probably wouldn’t remember that now. Tony just hoped he would remember that pranged aircraft were part of cropdusting.

Tony stood on the wing and looked back at the tangled mess. This would come out of his paycheck. Hell, it was an accident. The only thing that could make it worse would be if R.J. found out Tony was doing his wife. The sound of rubber squealing against asphalt made him look over his shoulder. The quick stop of R.J.’s pickup caused a cloud of dust to envelop Tony’s boss’s truck. R.J. threw open the driver’s door.

Maybe R.J. wouldn’t call the NTSB. Tony didn’t want to deal with the National Transportation and Safety Board again if he could avoid it. They could separate the two planes, and Tony would offer to work on the mangled wing for free, just to keep it all off his record. He raised his hand over his head, signaling to R.J. that he was okay. The next thing he knew, R.J. had a shotgun propped on the truck door’s open window. Both barrels were aimed at him. 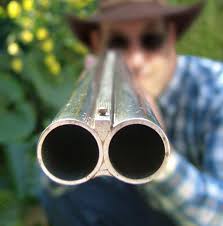 Shot gun pellets peppered the fuselage. Holy shit! Tony jumped from the wing and ran behind the hangar. He kept his back pasted to the hot, corrugated tin building. Two seconds of silence prompted him to peek around the corner. He saw R.J. break open the weapon and empty a box of shells on the front seat of his pick-up.     Damn, he was reloading.

“It was an accident, R.J.,” Tony yelled, venturing from behind the building, but not far. “Fluid leaked from the cylinder. I didn’t have any right brake.”

R.J. took aim again. Tony stepped back, spun around, and lunged behind the hangar just before R.J. started yelling.

Tony dashed behind the conjoined planes, the blasts following him. He snagged his helmet from the ground and dove head first into the front seat of his car. The gear shift stabbed him in the ribs. Damn. A shot hit his windshield. Shit. Shit. Shit. He yanked off one glove and fought to remove his keys from his pants pocket. Another shot. He fumbled with his keys. His shaking hand struggled to make the key penetrate the ignition switch.

One thought on “FLYING BLIND – Chapter 1”