In its long journey up from the center of the Earth, the gemstone tourmaline passes over a rainbow, assumes its colors, and creates the Aurora Borealis, or so the legend says. Outside a pub near Donegal Square in downtown Belfast, Liam looked up at the sky and waited for the legend to manifest. The Northern Lights were supposed to put on a show that night, but with city lights all around him he could easily miss it. 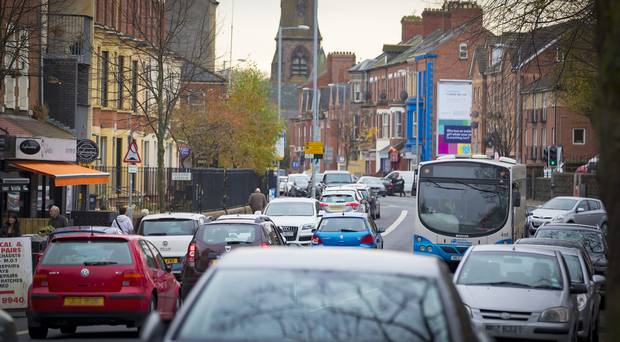 The bus ride from the pub to Liam’s mother’s house took only ten minutes. He knew the route like his own heartbeat. It wandered through the downtown streets and passed over a bridge. There, the Statue of William of Orange, his brass horse tarnished green, guarded an intersection. The street narrowed and made a curve. Tall homes stood shoulder-to-shoulder at the edge of the road. Their upper stories leaned toward the top level of the double-decker bus where Liam sat.

Liam stood as his stop approached, maintaining his balance like a sailor onboard a ship. His height, dark hair, and love of the drink came from his father, but his blue eyes, tart humor, and kind nature were all from his mother. He moved down the stairs toward the driver and waited, grabbing a pole in anticipation of an abrupt stop.

“I’ll be leaving here, Patsy,” Liam said, calling the driver by his nickname.

“And wouldn’t I know it now?” Patsy answered, gliding toward Liam’s stop and opening the doors with a whoosh. “Haven’t I let you off here every evening for the last five years?”

“Aye, but you aren’t getting any younger, man,” Liam teased. “You could forget and take me to the end of the line. And me with no coat tonight.”

“I’d toss you off before the end of the line,” Patsy answered. “There’s a beautiful lass waiting for me there, and I won’t have you stealing her.”

“Would I?” Liam asked, heading for the door.

“It wouldn’t be the first time now, would it?”

“Ta,” Liam answered, hopping from the bus and heading down the street to his mother’s house. The early spring evening was crisp and, at half past six, dark out. It wasn’t like summer, when the day seemed to hang on to the sunlight, keeping it late and bringing it early.

Liam took the long way home through a park with a view of the Ardoyne Cathedral. To the north, the cliffs of Cavehill towered over the city limits. He couldn’t look at them without thinking of the treasure his ancestor buried there—or so the family story went.

Away from the city lights, cameras atop the police station operated 24 hours a day. They filmed the area around the murals, which depicted stories of “The Troubles” from both sides, Catholic and Protestant. Politicians said The Troubles were in the past, but the camera told a different story. So did the subtle signs of the divided neighborhoods. A Union Jack at the corner marked where a Loyalists section began. The Irish flag down the street hung at the edge of an invisible line where the neighborhood’s sympathies changed.

Such was the place where Liam lived now, different enough from the past. The change allowed a Catholic like himself to be out at night, but old habits die hard. He kept watch over his shoulder, glad he still had a good arm for flinging the odd rock. Liam waited at the edge of the park, hoping to catch the nighttime show of lights. From there, he spied the silhouette of someone near the playground equipment.

The swings and the play structures stood like black wire frames against the fading twilight. The person beyond them ran back and forth along the edge of a precipice, chasing a big dog. A man? a woman? Liam couldn’t tell. He started to walk on but stopped when he heard the person calling the dog’s name.

Liam watched for a few more seconds, and then realized the owner was limping, his ragged gait no match for the dog’s long, easy strides. The animal looked like a cross between an Irish Wolfhound and a horse.

Liam started toward them, hoping to help corral the animal. It was just his nature to be helpful. It was why he still lived with his mum. His father’s passing had left her a widow. She, along with his three aunts, all unmarried, needed a man around to help with their three separate households. It wasn’t how he had envisioned his life, but they were always quick with a warm cup of tea on a cold night, and plenty of encouragement, no matter what he faced in life. Others had it much worse.

Beyond the park, Liam could just see the Lower Ardoyne in the fading light. He knew it well. The peaked roofs of identical houses lined up block after block, forming straight lines like brown corduroy fabric. Lights from the streets below began flickering on one by one. All the little chimneys poked the night sky, each like lit pipes, spewing smoke from peat fires. As Liam drew closer to the edge, he recognized the familiar face of the limping man. He was the postman who delivered at his mother’s house each day. He was the same man who used to make his mother’s dog bark. The man who was part of a running joke.

“Go ahead and bark, Grouser,” his mother used to say to the overgrown mutt. “He’s a Protestant.” The big black dog had almost seemed to smile and then he had barked more.

In fact, when Liam realized who he was going to help, his progress toward the runaway dog slowed. The limping man had nearly given up.
“Patch, come back,” the Protestant postman called, a broken leash dangling from one hand.

Liam pushed aside the thoughts of prejudice and started to sprint in the dog’s direction. Oddly enough, it was against his teachings, but not his nature. Life was changing so much all over Northern Ireland. He could remember being searched before entering downtown area—the same area he had just left without seeing a copper for miles.

When peace was first announced several years ago, people entered the shopping area with caution. There were still the odd Protestant marches down the main street toward the city hall in Donegal Square in the heart of Belfast. The Orangemen always seemed to pick a route through a Catholic neighborhood. But more and more, the participants were growing older, and the next generation was more interested in the goods in H & M or Boots or the food court at the new mall. Even the wee ones, whose grandfathers told them to march with the old men, looked over their shoulders at the abundant temptations shining in the store windows. 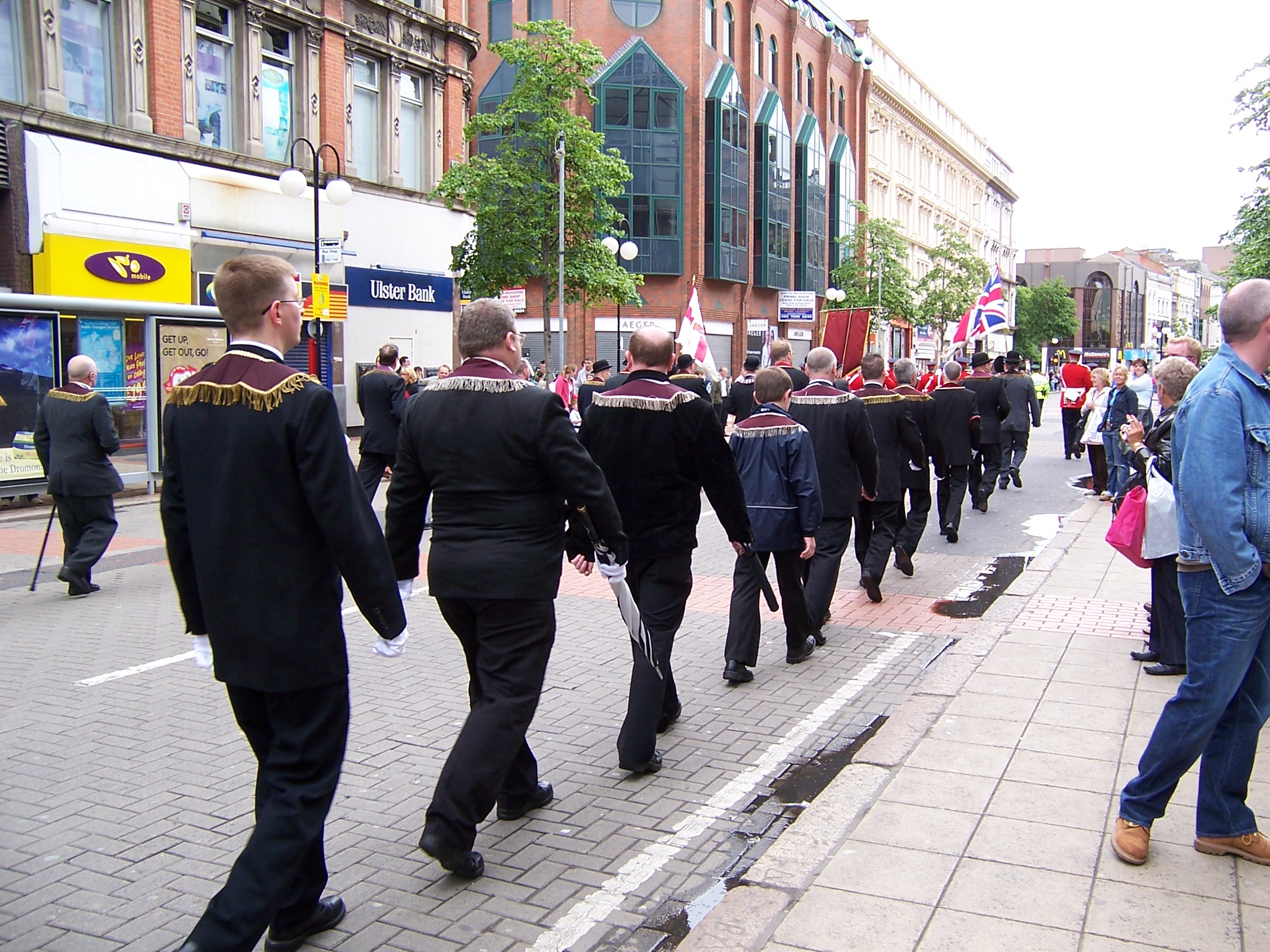 The dog came loping toward Liam. He extended both of his strong, rock-throwing arms and did his best to herd the dog back toward its owner. Instead of turning away from Liam, the dog jumped into his arms, landing Liam flat on his back.

“No, Patch,” the postman called, trying to quicken his hobbling pace.

Liam was able to get a hand under the dog’s collar, hoping he was a friendly old boy. Only last week, Liam’s mother’s dog, Grouser, the Protestant alarm, had passed on. Liam had lifted him from the floor in the entry way, loaded him into the back of his car, and driven him out to the old family farm for a proper burial. Yet another of many changes.

“I’m so sorry,” the out-of-breath postman said when he drew closer.

Not only was Patch friendly, he was downright affectionate, licking Liam’s face. Apparently, the Protestant dog didn’t know Liam was Catholic. Albeit not a good Catholic, more of a genetic Catholic, inherited from the generations before him. Though Liam rarely attended mass, he could say Hail Marys in his sleep and made the sign of the cross every time he came up to bat in a game of hurling.

“Good boy,” Liam was saying as he tried to push the dog to one side and stand up. He kept one hand on his collar, while the owner tied the broken leash to it. The dog seemed happy to see Liam, as if they were old friends.

“Are you hurt?” the owner asked Liam, standing over him with his dog now in tow.

“A bit wet,” Liam said, wiping the slobber from his cheek and looking up.

“I wouldn’t have caught him without your help,” the postman said, offering Liam a hand. “I’ve buggered up my knee chasing this beast. 54 Duneden Park, right?”

Liam stood with the postman’s assist, nodded, and brushed the grass from his pants.

“You’ve got the cheek of the devil,” Liam said, giving the dog a pat and turning to walk away. It shouldn’t have unnerved Liam that the man knew his address. He was the postman after all. They had spoken on occasion, if a package came when his mum wasn’t home. When the postage wasn’t right. When they were forced to.

“The leash gave out,” said the postman, following him. “You’re Liam, right?” Liam only nodded. “Peter Mahoney,” the postman said, introducing himself. “And this bad fellow is Patch.”

“We’ve met,” Liam said with a smile. It seemed odd then after all these years, he had never known the postman’s name. “Just a lark that I was out to catch him,” Liam continued, a little uneasy that the postman was walking beside him. Liam paused at the edge of the park and looked toward Cavehill. “I was hoping to see the Northern Lights.”

“As was I,” Peter said, also facing Cavehill. “At least until the leash broke. Do you think we’ve missed—”

His sentence was still hanging between them when the green and yellow flashing began over the mountains at the edge of town. They both watched, wordless. Patch laid down between them, seeming to enjoy the show as well. It was a grand display, lighting up the night like reflections off heavenly tourmaline stones.

“Will you look there?” Peter said, pointing to the horizon. “It’s a bloody miracle. Lucky it is we weren’t still chasing the mutt and having our backs turned to it.”

“Aye,” Liam agreed, surprised that he was enjoying the postman’s company. Liam looked over his shoulder, thinking maybe someone would see them together and believe they were up to no good. Peter saw his gesture and stepped away. It was an unintended affront on Liam’s part—a habit picked up for survival during The Troubles.

“It’s grander still to point at it, and have someone else to see it,” Liam added, hoping to erase his inappropriate behavior. All the rules were new now. It would take time.

“Indeed,” Peter said, adjusting the short leash in his hand. The lights subsided on the horizon, and they both knew the show was over. They shared an awkward silence before a soft rain began and broke the spell.

“Best be off for home,” Peter said.

“Not a problem,” Liam said, pausing and looking back at Peter. “Would you care—” He started, and then stopped himself. There was a pub at the corner, but that was a Protestant pub. There was one a block beyond that, but it was for Catholics. There was beer at the Chinese take-away, but there was nowhere to sit down. Peter was waiting for him to finish his sentence. “I will see you later,” Liam said, giving a faint wave.

3 thoughts on “Between Corduroy and Tourmaline – A Short Story”