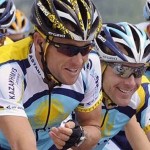 I follow cycling, not religiously, but almost. I follow the Tour de France in particular for a number of reasons, some of which can be traced back to Lance Armstrong. He won his first tour in 1999, but I didn’t know it. I was in France on vacation in the summer of 2000. Some friends who live there took us to the start of a stage. Lance was there. I didn’t know who he was. Our French hosts couldn’t believe it. They knew him all too well.

I soon found out who he–and a lot of other cyclists–were. I also discovered the most beautiful, terrifying, and addictive race in the world. Not only was Lance in the prime of his career, but the whole race had a melody all its own. The names of the riders rolled off the tongue: Mario Cipolini, Sylvan Chavanel, Alberto Contador, Fabian Cancellara. The names of the places are nearly as melodious: L’Alpe d’Huez, Le Col du Tourmalet, Pla d’Adet, and Le Champs-Élysées.

This has been a hard week for racing fans, particularly fans of Lance Armstrong. The United States Anti-doping Agency (USADA) released its findings against Lance to the World Anti-doping Agency (WADA), the International Cycling Union (UCI) and the sponsors of the Tour de France. Those 200 pages of damning evidence supposedly proved beyond doubt that Lance Armstrong was the kingpin of the world’s largest and most successful doping ring.

People who know me know that I am a huge Armstrong fan, and it’s not just his on-the-bike performance that I admire. His accomplishments in the area of cancer-fighting are to be applauded. He made the world sit up and take notice of pro cycling. He is responsible for half the adults who ride a bike today. His influence is huge.

Now, if I were a reasonable human being, I would believe all the “evidence” presented by USADA and admit that Lance isn’t a superhuman. He was a cheat and a liar. But for me, a few things are not adding up.

There were a lot of professional cyclists who were glad to hear that USADA had pressed charges against Lance Armstrong, but not for the reasons you might think. The USADA conviction rate–with their judge, jury, and executioner style of justice–is 100%. As a career cyclist, if your name was mentioned by USADA in connection with doping, you were going to be suspended for two years. Guilt or innocence had nothing to do with it. No one was ever able to successfully defend against USADA doping charges. Former and current cyclists were hoping Lance could change that. He had the money and the influence to either get fair shake or expose the flaws in the system. He could not. He tried initially, but he could see the writing on the wall and like any reasonable retiree, he opted out.  He had better things to do with his time and his money.

Now USADA’s 200-page report claims to expose the largest drug ring in the history of cycling. Or does it? Let’s look at some of the claims:

What USADA is asking us to believe is that not only did Lance dope for years, but all of his teammates doped, all of the “wags” (wives and girlfriends) were in on it, as were the ancillary support members of the various teams that Lance rode for. If I were trying to estimate how many people that entailed, it would be more than 100 people, multiplied by the nine years in question. In some ways, methinks USADA over-padded their story. There is almost too much evidence.

In addition, USADA has said Lance never had as many drug tests as he claims to have had and he was able to avoid them by:

For me, this promotes a visual of a Keystone cops-like testing force that was obviously less than diligent.

I think it’s important to say a word about the average cyclist. Lance is not average. The majority of cyclists in the peloton are on par—-intelligence-wise—-with the average surfer dude. Like Rocky, most of them went into a profession where they used their body. There are exceptions of course, but the majority of them are just average guys, not moral icons or brainiacs.

As far as I’m concerned, USADA has some ‘splaining to do. How could 100+ people over a nine-year period of time get away with “rampant drug use” and not get caught. Not one questionable drug test, not one snitch.

When it comes to the riders confessions, those who rolled over and admitted doping with Lance and by Lance got a six-month suspension. If you know anything about USADA and their conviction rate, these guys would normally be facing a two-year suspension. This six-month suspension did not start until the end of the 2012 cycling season, and ends well before the big races of the 2013 season start. Here’s the drill. Cop to your drug use and Lance’s and you race next year. Don’t, and you won’t see the start line until 2015. Tough choice? Not really.

One more thing I don’t understand. Folks who use blood-doping and EPO usually have health problems. Enough blood-doping thickens your blood to sludge. It causes heart attacks. None of Lance’s team members had health problems. A lot of them, now close to 40 years old, are still participating some of the hardest racing in the world. Unlike the before-and-after doping pictures of Barry Bonds, these guys don’t look any different today (except for a few more wrinkles) than they did before they met Lance.

Lastly, let me propose my theory to you, which is completely without proof, but comes from the eye of a beyond-casual observer of cycling and Lance Armstrong.

I watched how Lance won. It wasn’t just pedaling really hard and hoping for the best. He was a math wiz and a supreme strategist. If you believe the doping allegations, they would even prove he had to be of above-average intelligence to coordinate all those riders, team members, and medical personnel for all those years without ever getting caught.

Over the years, through different races, I have seen Lance pull off some pretty impressive maneuvers–mostly psychological warfare–in his attempts to defeat his opponents. I’ve seen him pretend to bonk (be tired). I’ve seen him get in front of the media and deride his teammates to convince his competition his teammates weren’t working for him. I’ve seen him pull in the front of the peloton in time for a turn, catch the wind, and leave his opponents behind. He wasn’t just fast, he was cagey. Maybe you think that proves he doped.

However, Lance was coming into the Tour de France at a time when the use of performance-enhancing drugs was starting to be questioned. Long before he started racing, it was a given. All the riders were doing it and, frankly, it was considered part of the sport. Lance re-entered the sport (post-cancer) during the “clean up” transition. Doping was out and inspectors were (supposedly) becoming more zealous. The conviction rate for using was on the rise. Still, some cyclists were old school and didn’t believe you couldn’t win without it.

It is my theory that Lance pretended that he and his whole team were doping, right down to the “blood in the fridge” and the EPO next to the butter dish. This would have worked to the team captain’s advantage in several ways. His team members gained power from the placebo effect. His competitors would believe he was doping and be at a psychological disadvantage. This belief may have prompted some of them to dope (and get caught) and be eliminated from the race. Perhaps the best part, is that all the drug tests came back negative. For me, this is easier to believe, in some ways easier, than USADA’s scenario for all those years.

Until USADA explains why they were unable to detect this huge drug ring year after year when “everyone knew” about it, I am sticking to my theory. Long after this doping scandal fades into history, the Tour de France will remain the ever colorful race it has always been. In its beginning, riders didn’t carry water or food . They didn’t ride fancy bikes or have team cars following them. They raced across the French countryside, grabbing wine from the tables of outdoor cafes for hydration and smoking cigarettes as they went. They stopped at blacksmith shops to repair their bikes. This is the history of this multi-faceted race. It will always be legendary and beyond the rules. That is what makes “Le Tour” the great race that it is. And I will always be a fan.